I just finished writing chapter 8 of The Hunt.  Earlier in the book, Derek encounters a slave in the Faranox dimension, frees it and then returns it to its own home dimension.  In chapter 8, the whole gang goes to that being’s home dimension where they meet more of the race of aquatic humanoids that live there.  This is the chapter where their race is officially given the name blue fins, which was given to them by Derek since humans aren’t capable of reproducing the sounds they make to communicate with one another, and therefore can’t pronounce the actual name of their race, or any of their individual names for that matter.

There’s an interesting development concerning the telepathic communication between the two races as well.

The cover has been made for book 2!

Tonight I made up the cover for book 2, The Hunt, so all the graphics are ready to go for its launch.  Now I just have to keep plugging away at the book until it’s done.  I’ll probably be taking a few days off from writing so I can get my reviews done for the next issue of Rogue Cinema and then get the new issue posted, but after that, I’ll be back at it with a vengeance.

I’ve added a widget over on the right side that has a progress report of where I’m at with the second book.  Aside from the humor, this second book isn’t like the first book.  This one is riddled with absolute carnage, some of it so over the top that it’s absolutely hilarious.  I was even laughing as I was writing it.  I can’t wait to get this thing finished and get it out there.  I still have a long way to go, but I’m working hard on it.  This one scene I wrote tonight with Tina and Sarah, it was like Lucy and Ethel meet The Evil Dead. 😀

Anyway, things are progressing along nicely.   I’ll keep posting updates when I have them. 🙂

Since I’ve been alone here, I’ve had a lot of time to work on things, and by things, I mean the next book.  I just finished up chapter 3 with 12,071 words.  I’m about to start chapter 4.  Things have really gotten exciting!  I might post some more teasers at some point as well, but I don’t want to give too much away too early on. 😉

Update to this last report:

It’s now 5am and I’ve been up writing all night (again).  Chapter 4 is done, and it’s a very intense chapter. In the last 24 hours, I’ve pumped out 12,033 words in three full chapters. That’s crazy stuff right there! Up to 17,229 words total now. Not bad for literally a couple of days worth of work, huh?

Unseen Things: The Hunt (book #2) is in the works! – Teaser included!

Yes, that’s right, I’ve gotten started on the second book in the series, and so far I’ve finished chapter 1.  While Origins was intended to introduce and develop the characters, as well as the overall theme of the series, The Hunt is getting down into the meat of it.  There’s going to be a lot more action and a whole new world to explore as the four make their way into another dimension in an effort to rescue Jarrod’s family.

Here’s a teaser from chapter 1 of The Hunt. This should tell you a little about the kind of stuff that’s going to be going on in this book.

“Do we have everything?” Jarrod asked as he threw a large duffel bag into the back of Derek’s truck. They’d decided to take Derek’s truck this time around, because Sarah’s car was too small to hold them, their luggage and all the gear.

Derek ran into his garage, and then came running out with an armful of small, metal canister looking things.

“What are those?” Jarrod asked, looking at them curiously.

“Well, remember how Patricia said we should burn the bodies to cover up the fact that they’d been murdered? Well that’s what these are for. They’re those little torches that chefs use. I figured regular sized torch bottles would be too big and heavy to carry, and would be more than we need anyway. These’ll do the trick just fine and they’re a hell of a lot smaller.” 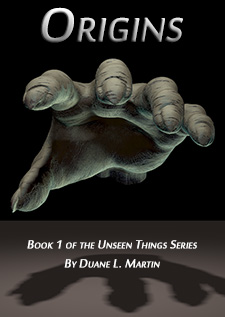