I haven’t started on the next book yet, but last night and this morning I designed the cover.  So that’s a start, right?  I’ll begin work on the next book within the next week.  I’m probably going to be giving Mike, Jeremy, Jenny and Laurie a bigger part in this one, even if it’s just in some sort of a support role.  I want to gradually get them more and more involved in each book during the lead up to them joining the team.

I’m not going to say much about it right now, but let me just say the Faranox did something they’re going to seriously regret. 😉 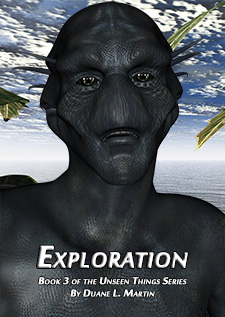 Book 3 in the Unseen Things series is now available!  You can get it here on the official website in epub, Kindle (mobi) and PDF formats by clicking Buy the Books! in the menu at the top, or you can get it from Smashwords or Amazon.  Once Smashwords ships it out for premium distribution, it’ll go out to the other usual retailers as well.

I’ve updated the Characters, Trivia and Series pages all with new info about Exploration.

After a successful raid on a Faranox village in which they rescued Jarrod’s family, as well as a large number of slaves from several other dimensions, Jarrod, Derek, Tina, Sarah and Patricia returned home for a well deserved rest.  Unfortunately, in their line of work, rest is never a permanent state of being, and soon enough they find themselves in the blue fin dimension forging a bond of friendship with its inhabitants, who at first glance seemed like a simple, friendly people living in a tribal society, but appearances can be deceiving and soon enough they learn that there’s a lot more to their new friends than meets the eye.

With major story and character developments, Exploration propels the Unseen Things series forward in new, exciting and sometimes tragic directions.  The characters find themselves dealing with a variety of issues including love, family, morality, life and death, as well as old foes that return to cause new problems.  It’s a wild ride filled with love, humor and adventure, and one that you won’t want to miss.

I’m very happy to announce that the initial story work on Unseen Things: Exploration is now complete.  In the next day or so I’ll be starting on the proofreading and editing process.  The book should be published and available by the first week of January.

The title of book 4 will be Unseen Things: Revenge.  When you reach the end of book three, you’ll know why. 😉

Book 3 – Unseen Things: Exploration, is getting closer to completion.

I have roughly three chapters left to go in Exploration before the story itself is complete, after which I’ll begin the proofing and editing process, which generally takes about a week.  I’m going to have a test reader read the book this time around as well when I’m done proofing it just to make sure I didn’t miss anything.

Exploration isn’t just the title of the third book.  I chose it for a specific reason, because the third book is really very much about exploration, but not just in the traditional sense.  It’s about the characters exploring themselves as people, exploring the depths of their relationships, exploring the limits of their morality and what they’re willing to do for the ones they love.  This is all in addition to spending a lot more time in the blue fin dimension and learning about their new friends and how they live.  There’s really a lot of ground covered in this book, and once again you’ll get to see the characters grow as people.

Jeremy, Mike, Jenny and Laurie make a return in this book as well.  Their desire to join the team is stronger than ever, and Derek and Jarrod come up with some ways to help them along with that ambition.  At some point in the future, I may actually do a book that focuses on them and their experiences after they do finally join up, but I’m not sure yet.  I’ve read series before where they took the focus off of the main characters for one book, and while it was ok, the whole time you just sit there missing the main characters, and for some people it may become the bastard book they’ll skip over as they work their way through the rest of the series, so I’m not sure about that yet.  What I might end up doing is giving them a few chapters in one book to cover a mission they’re sent on rather than giving them a whole book to themselves.  I think that might work out better in the end.

What else will you find in this third book?  You’ll have to read it to find out, but I can promise you one hell of a ride with some great humor as well as some tear jerking moments.

Right now I’m on schedule for a January release.  I’m thinking by the end of the first week of January, or just after that, I’ll be able to release it, so now would be a great time to buy the first two if you haven’t read them yet.  This is a series, so you do need to read the books in order to be able to follow everything.

Anyway, I’m really excited about this one and looking forward to getting it out there.  I’m not sure when I’ll start work on the fourth book.  I’ve written the first three literally in less than two months, so I need to spend some time actually promoting the series and getting it out there before I start work on the next one.  I’ve been putting that off until I had the third book out there, but once it’s out, that’ll be the time to really hit the promotional stuff.

Anyway, I have a bit more to go in chapter 13 before I finish up for the night.  I just finished writing a hilariously disgusting scene that even had me laughing while I was writing it. 🙂

The series is now available for purchase on the official site!

Just click the Buy the Books! nav link at the top of the page.

I just finished chapter 7 of Exploration.  I’m at around 44% now and I have to say that there have not only been some extremely interesting developments in this book, but also some really emotional moments.  I’ll also say that things are getting pretty spicy between the main characters, but I’ll leave it at that.

I’m not sure exactly when I’ll be finished with it.  The best guess I can give for a release date is some time in January.  Once I finish it I’ll have a better idea, because I usually allow a week after the story is done for proofreading and editing, so typically a week after I finish the writing, I can get it out there.  The cover is already done and it looks absolutely better than I could have possibly hoped for, so we’re all set on that front as well.