Smashwords has an automated interview thing where it allows you to answer pre-written questions to add to your author profile.  Here’s the link to my interview if anyone’s interested in checking it out: https://www.smashwords.com/interview/unseenthings

Mostly it’s just generic questions about different things, but my answers should give you some insight to the person behind the books.

Work has begun on book 19, Reapers!

I finished the cover and all the other graphics for Reapers, so naturally I had to get started on the next one right away, because heaven forbid I actually take a break or anything, right? 🙂

Actually, I started it because where it starts picks up exactly where the previous book leaves off, so I wanted to get going on it while I was still in the mindset of that scene, if that makes sense.  Basically, I didn’t want to lose the vibe I had going with it.

As for the cover, I did something a bit different with this one than I’ve done with previous ones, and I’m really happy with how it all came out.  Now I just have to get the book written.

Book 18, Repercussions has now been published! 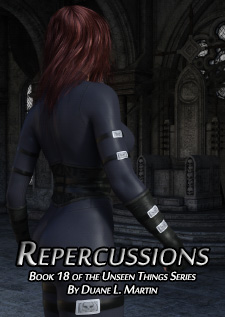 Book 18 of the series, Repercussions is now available.  It’s currently published on Smashwords, OmniLit and Google Play, as well as here on the official site.  It’s currently going through the publishing process on Amazon and will soon be available there, as well as on all the other major retail sites.  I’ve also updated the Trivia section here with some interesting info about the book and various references to things that are made in it.

Synopsis: Actions have consequences.  You may have done something in the past, or perhaps even on this very day that could alter the course of a whole civilization, or simply change the fate of one individual.  The gang soon discovers this as they start checking in on some people and places from their past to find out how things have ended up for them over the course of the past two and a half centuries.

Plus, when Beth organizes a whole new round of exploration, Giles and Savaric find themselves on a sunless world in a dimension filled with energy forms that appear to be the ghosts of intelligent species from a variety of different dimensions.  When they bring in Charles and Richard to help them investigate it however, one of the energy forms tries to get at them so aggressively that Richard decides to capture it and bring it back to the lab in order to see if they can use the energy to restore the entity to its original form.  Unfortunately, what they end up bringing back is none other than an old enemy that none of them had ever expected to see again.

The first draft of book 18 of the series is now complete!

I just finished writing Repercussions, which is book 18 of the series. This book took me well over three times longer to write than the others for several reasons. First, I cover a LOT of ground in this book, both with new discoveries and with checking in on the results of their involvement with various things and people over the past two and a half centuries. Between covering that much ground, and some personal distractions I had going on in my life, it just ended up taking as long as it took.

How many more books will there be in the series?  I honestly have no idea.  To be honest, I could have ended it with this one since it sort of wraps up the details on a whole variety of different things, but it ends in a cliffhanger that I kinda want to explore.  I’ve never been big on ending things with cliffhangers.  It leaves the reader, or in the case of television and film, the viewer unsatisfied.  I read a book or see a film to be told a story, not to come up with my own, so I don’t really want to end the series leaving a situation unresolved.  That said, did I have to end this book the way I did?  Actually yeah, I think I did.  I’ve had the ending rolling around in my head for a while now, and I think it’s really sort of cool and intense.  Is it causing me to have to write a whole other book to explore it?  Yeah, but it’s worth it in my opinion.  I always said I’d continue the series as long as I still had some story to tell.  Well, I still have some story left in me, so there’s at least one more coming.  As for any more beyond that, I guess it just depends on how the next one ends.  If it leads to something else, great.  If not, that’s fine too.

I have another book I want to write that could turn into a series of its own, but I don’t want to write that one until I’m done with the Unseen Things series.  I know some authors can write multiple series at the same time, but I’m not a big fan of working that way.  You lose touch with the characters and what’s going on with them if you do that, and this series means far too much to me to ever lower the quality by working on other books in between.

All I can say right now is that the next book will probably be the last book of the Unseen Things series, because I do want to move on to other things, and I really think I’ve kind of hit a wall as far as coming up with new stories for them.  However, last book doesn’t necessarily mean last book.  It may mean the last book until I come up with a new story, but I’ve written this series one book after another with very little down time in between each one.  After the next one, I may take a fair amount of down time to work on other stories for a while until something new hits me for this series.

Ok, I’m rambling now, so I’ll stop.  As of right now, two things need to happen.  First, I need some copious amounts of sleep, because I was awake all night finishing the current book.  Second, I need to get Repercussions edited, which is where the copious amounts of sleep come in.  Trying to edit a book on very little or no sleep whatever is just begging for a crappy end result.  So sleep now, edit later.  That’s the winning formula.

Book 18, Repercussions has taken me a long time to get through.  In fact, it’s taken far longer than any of the other books in the series for a variety of reasons relating to the story as well as some issues I’m dealing with in my personal life.  Currently I’m working on chapter 15.  I’ve got about two-thirds of that chapter still to write and then one more after that.

I wasn’t sure if this was going to be the final book, or at least the last one for now, but there’s something that they come across in this book that gave me an idea for the next one, which will be called Reapers, which will take the characters to the very core of life in the multi-verse.  At least, that’s probably what’ll happen.  I haven’t written it yet, so we’ll just have to see how things play out.  I do have a few ideas though.

Now, I have been asked on many occasions about print copies of my books.  The reason I haven’t done print copies up to this point is because the program I use to write my books, Sigil, writes natively in Epub format, and I also write in a very specific e-book style to make it easier on the reader’s eyes.  Combine that with the fact that I wasn’t familiar with Create Space formatting, and it all just made it easier to keep the series strictly in ebook format.  However, recently I found a Create Space template for Word that completely simplified the process and will allow me to keep the books looking essentially the way they do in ebook form, with a space between each paragraph and line of dialog.  Yes it’ll add to the page count considerably, and the cost of production, but it is far easier on the reader, and considering that my books are probably each about 90% dialog, it’ll make it considerably easier to follow.  I’m not sure when I’ll start working on that, but I do have plans to create print copies of the books at some point here in the future.