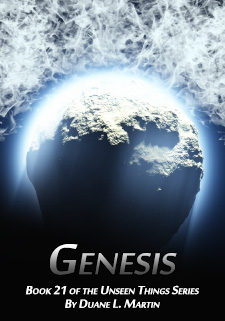 The final book of the Unseen Things series is almost ready to go!

I finished editing Genesis and I’m really happy with how it came out.  I truly believe it’s a fitting end for the series, and I can’t wait to get it published.  The only thing I’m waiting on right now is for my wife to finish reading it, so she can double check it for me and catch any little errors I might have missed when I edited it.  She should be done with it at some point this weekend, so as soon as she is I’ll get it published.  Tomorrow I’ll start work on my next book, Retribution, which will be a horror / suspense novel.

I just finished editing chapter eight of Genesis.  I’ve still got eight more chapters to go, but I’m having to mix editing that with editing another book I have to do for work, so it’s going slower than usual.  It is progressing though, and I’m really happy with it all.

I’ve also created the cover for my next book, and I’ve been thinking about how I want it to play out.  It’s definitely going to fall in the horror/suspense genre, but it’s more or less going to be just a one off.  I don’t typically write in that genre, so after I get done with it I’m not sure what I’ll be doing.  As a writer, one of the most exciting things you can do is to expand your abilities by tackling different genres.  So far I’ve done contemporary fantasy, sci-fi, and romantic comedy with just a hint of mystery thrown in.  Now I’ll be adding horror to the mix, so I’m really going to have to think about what I want to do after that.  Perhaps something more paranormal.  I dunno.  I guess I’ll just have to see what comes to me down the road.

As for the next book after Genesis, it’ll be called Retribution, and the cover is awesome as hell, if I do say so myself. 😉

I probably won’t post any more updates until I publish Genesis.  Just know that I’m working diligently on it and I’ll get it published just as soon as I can.  I’m hoping to be able to have it done by next weekend, but we’ll see how it goes.

The first draft of Genesis is now complete!

It’s been an amazing run, and I love my characters with all my heart, but there are new stories to tell, and as a writer, you have to know when it’s time to say goodbye to the old and move on to something new.  The next few books I write will likely be solo novels, because I definitely want to get more non-series books out there, but who knows?  The one I’ll be writing next could warrant more than one book…or it may not.  We’ll see what happens.  I’m still formulating the ideas for it, and I’ll likely design the cover and get started on it right after I get Genesis published.

That’s it for now.  Editing is a tedious process and I’m not looking forward to it in the least, but I’m going to get through it just as quickly as I can.  There’s a special reason for that, which I’ll share later…if I manage to make the deadline.

Things are winding down on Genesis…

I’m in the middle of chapter 15 on Genesis now, and things are starting to wind down.  It’s a bittersweet thing for me, because for the past three years these characters have been my family, and now it’s all about to come to an end.  That being said, I think the storyline I’ve written for Jarrod in this book is not only a fitting end to the series, but it’s some of my best character work to date.  I already know how it’s going to end, so right now I’m just filling in the rest to get to that point.  I truly believe that anyone who’s read the series will find this to be an emotional and satisfying end to it all.

That’s it for now.  I’m doing some writing this morning so I can get to some other work I have to do for my job this afternoon.  Hopefully I’ll have the book finished by early next week at the latest, and then I can get started the editing process.

So…I’m currently nearing the end of chapter 14 of Genesis, so I only have two more chapters to go after that.  However, last week I caught my wife’s cold, and I don’t know if any of you have ever tried to write with a cold, but it just doesn’t work.  It’s hard to put coherent thoughts together when your head’s all blocked up and you generally feel like crap.  I tried to write a little this morning, but I’m just not there yet.  Hopefully tonight or tomorrow I can get back to it.

I’m on the downhill slope of it now.  Hopefully I’ll be over it by tonight.  I missed both my gym nights last week because of it, so come hell or high water I’m going tonight.  Even if I don’t have the best workout because I’m still recovering, I need to get back in there.

That’s it for now.  I’m excited because the end it getting close, but I’m also incredibly saddened by it.  It’s been a great run, and my characters will always live on in my heart, but there are new stories to write and new characters to meet, so that’s where I’ll be going next.  As I said in a previous post, the next one is going to be rather dark, just because I want to change things up a bit, so that’ll be an interesting experience.