Just got my account set up on Gab, which is a Twitter alternative that actually respects free speech. I’ll still be on Twitter as well just out of necessity, but you can find me on either Twitter or Gab by searching for @Duaners. You can sign up for an account on Gab by going here: https://gab.ai

I just finished chapter 12, and I’m really happy with how this book is coming out.  I think it’ll make a fine conclusion to the series.  That said, it may not be the last you see of these characters.  Just because the series is ending doesn’t mean that there won’t be an additional book creeping up here or there that’s full of short stories about things they went through over the centuries.  I may end up doing that at some point, but I already have plans for my next book, which will be another standalone that’s much darker than my previous books.  I don’t have a name for it yet, but the idea’s already in place.

That’s it for now.  I’m still plugging away at it, because that’s what writers do. 🙂

My whole life has been a tissue of lies… :(

I just found out that there are 13 zodiac signs according to NASA, and all the dates have changed. I spent my whole life thinking I was a Sagittarius, but as it turns out I’m actually an Ophiuchus, which sounds very much like something that you’d cough up out of your lungs when you’re sick. First I was a bad ass centaur archer, and now I’m a great big nugget of lung butter. Freakin’ wonderful. 😛

New links added to the paperback version of Cindy’s Story… 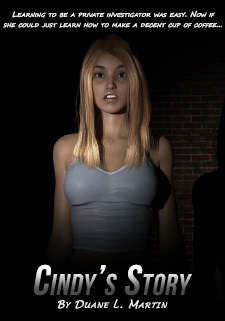 I’ve just added more links to purchase the paperback version of Cindy’s Story on the official site in the Buy Online section. The following is (as far as I know) a complete list of retailers who are carrying the paperback version. I’m only listing one Amazon link, but it should be available at all regional Amazon sites.  There may be other sites out there carrying it as well, but these are the ones I know of.

Genesis progression, and what’s coming next…

I just finished chapter 5 of Genesis, and I’m super happy with how it’s been turning out so far.  I’m doing something really deep with one of the characters, and I have a seriously cool ending planned.  This is the final book of the series, so I want to end it on a note that’ll leave people satisfied.

I will say that writing this book has made it clear to me that the series has reached its end.   I could write books that focus on different places or people in the Unseen Things universe and probably go on with it forever, but at this point I just don’t have any story left to tell that wouldn’t feel like I was dragging it out just for the sake of dragging things out.  This series has been a huge part of my life, and the characters have become family to me, so it’s really sad that it’s coming to an end, but it’s also exciting in a way.  Not only because I’m ending it in a way that involves story elements that I’ve had in mind for quite some time now, but also because I’m ending it in a way that I can be personally satisfied with.  Once it’s done, I’m not going to look back on it with any regrets about how I shouldn’t have ended it, or how I could have maybe done just one or two more books.  Does that mean I’ll say goodbye to it forever though?  I don’t know the answer to that question.  Maybe yes, or maybe not.  I may write the occasional Unseen Things short story to post here on the official site, but as far as full length novels go, this one will be the last of the series.

So what’s coming after that?  Well, my recent publication of Cindy’s Story has inspired me to write more solo novels.  I’ve had a few ideas running through my head about what to do next, but I haven’t settled on anything yet.  In Delain’s new album, they have a song that has the word “entropy” in the lyrics.  I sort of latched onto that word when I heard it and it gave me a story idea, but I’m not sure what to do with it yet.  I’m still sorta ruminating over it.  Thing is, something like that wouldn’t have much humor in it.  It would be seriously dark in its story, which isn’t a bad thing I suppose.  Cindy’s Story had a ton of humor in it, and the Unseen Things series has had quite a bit of humor as well, so I’ve never written anything that was really dark.  Perhaps it’s time for me to do that?

Thing is, I don’t want to be consistent as a writer.  Quite often writers pigeon hole themselves into a certain genre, but I’ve never been like that.  The Unseen Things series for example started out as contemporary fantasy, and then morphed into sci-fi, but there are other genre elements mixed into the series as well, including comedy, drama, action, etcetera.  Cindy’s Story is the same way.  It contains some of the best comedy I’ve ever written, though it also incorporates some drama and even a little action in a few scenes.  Now if I write a dark novel, I’ll be making use of even more genre elements.  Consistency of genre may be fine from a sales aspect, but from a personal aspect, it’s not very satisfying.  It’s my hope that as people discover my novels, they’ll enjoy my writing style and stick with me regardless of what genre any particular novel of mine falls into.

Anyway, that’s it for now.  I’ll post more updates down the road as things progress further.