Resurrection, book 9 of the Unseen Things series is now available! 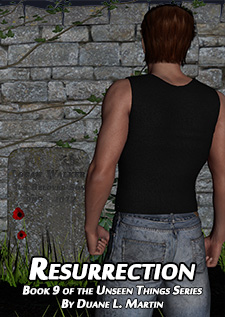 I am very happy to announce that book 9 of the Unseen Things series is now available!

Synopsis: When Logan’s body was removed from its grave, they thought it was just the work some a cult, or a deranged individual. Never in a million years would they have dreamed that Derek’s brother had been taken for a very specific reason, nor could they have possibly guessed what that reason might be.

They’d gained their immortality and all of their vast mental and physical abilities from the serum they were given, but what if it could be used for more than that? What if it could be used to regenerate the dead and then bring them back to life with their memories fully in tact? That’s what Freddie wondered, and based on the education that he and Diana had received in the field of genetics from Charles and Richard, Freddie came up with a theory that allowed them to do just that.

What would you do if suddenly your loved ones could be brought back to life with the same immortality and abilities that you have? It was a possibility that was something they never could have conceived of, and yet all of a sudden it was all too real.

With new abilities, new characters and new secrets revealed, Resurrection marks another great leap forward in the development of the Unseen Things universe.

Resurrection is book 9 of the Unseen Things series.