Trackers, book 7 of the Unseen Things series is now available! 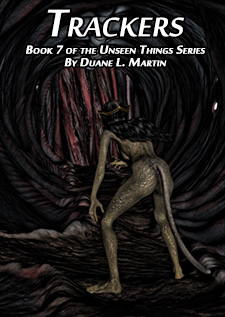 I am very happy to announce that book 7 of the Unseen Things series is now available!  This book is entirely devoted to the team in Scotland, though characters from the original team in Washington do make occasional appearances.

Synopsis: When they volunteered to move to Scotland to start up a new operation there, they all had their own reasons for doing it.  Some wanted to prove themselves, while others just wanted to make a fresh start.  Whatever their personal reasons were for going, they all still had the same mission, which was to free the human slaves from the Faranox dimension, explore new dimensions and to make friends wherever they could.

When they made their first journey into one of the previously unexplored dimensions however, they encountered a very hostile race that they later come to call fangtails.  Unfortunately, when they find themselves greatly outnumbered and forced to run for their lives, Jenny loses her amulet, which later ends up in the hands of the fangtail queen.  When she accidentally opens a portal and ends up in the human dimension, it takes the entire team along with the help of one of her own kind to track her down.

Eager to prove themselves after the fiasco with the fangtails, Beth, Sheryl, Martin and Dylan all head out to find a Faranox village so they can free the human slaves and bring them back home.  It was supposed to be a standard operation where they went into the village, killed the tribal leader and all of their Agaronin and then took the amulets and the slaves and headed back home.  What they found when they got there however was something entirely different than anything they’d ever expected.  They found themselves in what was called a free village, where slavery was outlawed and the humans who’d escaped from the slaver villages and made their way there were taken in, cared for and protected.  Now, with the help of their tribal leader Thayelle,  a plan is set into motion to eliminate slavery entirely from the five surrounding villages, so Thayelle and her people can live in peace and the human slaves can be brought back home.