Resurgence, book 11 of the Unseen Things series is now available! 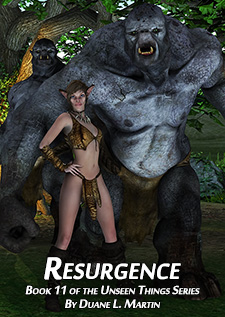 Book 11 of the Unseen Things series, Resurgence, is now available here on the official site, as well as Smashwords and OmniLit. As soon as it goes live, it’ll be available on Amazon and all the other retail sites as well.

Resurgence Synopsis: The Zethichtalarin were nearly wiped out by the Nathalis, but thousands had managed to escape the destruction and wound up scattered throughout many different dimensions. They chose the Faranox dimension in which to regroup, because not only were the people there somewhat primitive, but the slaver villages had a ready supply of slaves that they could manipulate the free army into capturing and handing over to them. Their goal was to use the slaves to build themselves a new city where they could gather together the survivors of their race and plan their next move. They wanted revenge against those who had destroyed their worlds, but they didn’t count on facing a far different and vastly more powerful enemy that was out there searching for them, and whose only goal was to put and end to their evil once and for all.

Just as a side note, this book contains what has now become my favorite chapter in the entire series. 🙂