Reapers, book 19 of the Unseen Things series has been published! 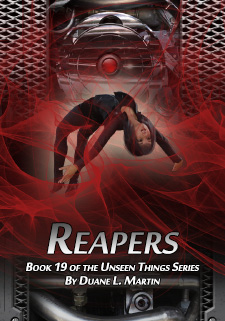 I’m very happy to announce that Reapers, book 19 of the Unseen Things series is now available!  It’s currently published or in the process of publishing on the following sites:

Synopsis: When the reaper drones showed up at the party to kill Diedre so they could reclaim her energy and take it back to Purgatory, she and Logan had go on the run, hopping from dimension to dimension in an effort to try to stay one step ahead of them while the folks back home work on a way to rectify the situation without leaving all of the energy forms on Purgatory stranded there for all eternity.  In their search for answers however, they make some discoveries that explain a lot of things, including why Diedre was so psychotic in her previous life.

Also, when Derek pays himself a visit from the future, he learns that their attempts at finding a solution to the Diedre situation appeared to have worked at first, but things ended really bad for them shortly thereafter.  Now they have to think outside the box to come up with a new and unique way of solving the problem that they wouldn’t have otherwise considered if they’re to have any chance at all of altering the timeline, so the people they care about don’t end up dead.

Reapers is book 19 of the Unseen Things series.