Encounters, book 10 of the Unseen Things series is now available! 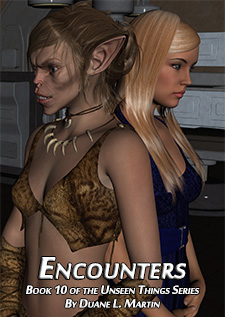 I’m very happy to announce that Encounters, book 10 of the Unseen Things series is now available.

Synopsis: The Nathalis destroyed the moons in seven different dimensions in an effort to to wipe out the Zethichtalarin threat, and while it did succeed in killing off the majority of their race, it was inevitable that some would escape to other dimensions before their worlds were destroyed.

It was assumed that the survivors would no longer be a threat, but when Beth and Erin encounter one of their military officers in the Paradise dimension, that assumption is quickly proven wrong.

Now that the Zethichtalarin have begun to show themselves again, what lengths will they go to in order to rebuild their empire? The answer may be found in the Faranox dimension, where a tribal leader from one of the free villages has formed an army with advanced tactical knowledge that no Faranox tribal leader would normally possess.

As the evidence mounts that the Zethichtalarin were behind the formation of that army, the group in Washington forms a team whose job is to search the Faranox dimension for those responsible, and put an end to their plans for a resurgence once and for all.

You can purchase this and all the other books in the series by going to my Amazon author page.

Also, if you’d like to add any or all of the series on Goodreads, you can head on over to my author page on there as well.