Conspiracy, book 14 of the Unseen Things series is now available! 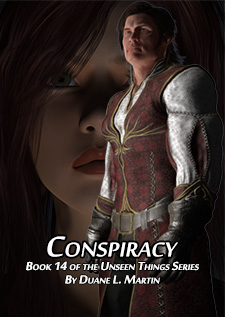 Conspiracy, book 14 of the Unseen Things series is now available!

The first book of the Unseen Things series, Origins, was published on November 23, 2013.  Conspiracy, the fourteenth book of the series was published on November 22, 2014, one day before the one year anniversary of the publication of the first book.  That means that I’ve published fourteen books in one year, with a combined total word count of 1,437,533 words.  That’s not counting the bonus scene and the deleted scene that are posted here on the website.  That’s just the word count for the books themselves.  I don’t think I need to tell you all how much sleep I missed to be able to pull that off.  Anyway, here’s the synopsis for Conspiracy…

Synopsis: The hybrids are aging rapidly and time is running out.  In his desperation to save their lives, the colonel turns to Derek and Jarrod for help.  Their plan to get the hybrids off the base however hits a snag when an administrator named Wilcox starts throwing some nasty accusations at the colonel, forcing them to take drastic steps in order to save not only lives of the hybrids, but the colonel’s life as well.

Also, when Tina, Sarah and Jarrod kidnap Heather from the house in Scotland so they can take her out on a little adventure to a random dimension, they thought they were going to end up someplace exotic or run into yet another strange species that they’d get to document and study.  Unfortunately, the random dimension they chose didn’t provide them with any of that.  Instead, they find themselves in some very familiar surroundings, and run into some people they’re more than intimately acquainted with.

And finally, when Commander Arthwal’s investigation into the mystery surrounding the deaths of Alarwyn’s parents leads to a revelation that could rock the very foundations of the Nathalis political system, he has to choose between following the status quo and doing what’s right in order to give Alarwyn the justice she deserves.