Companions, book 13 of the Unseen Things series is now available! 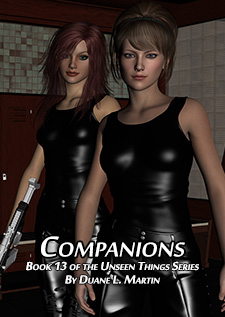 I’m very happy to announce that Companions, book 13 of the Unseen Things series is now available.  It’s currently published or in the process of publishing on Amazon, Smashwords, Google Play and OmniLit.  It’s also available for purchase right here on the official site.

Synopsis: Since Alarwyn had been an orphan and Stephanie never had any real family to speak of, from the moment they met they latched on to each other, developing a sisterly bond that made them almost inseparable.

In an effort to get out there and prove themselves to the others, they head off to the reptilian dimension to do a little exploring, but things take a serious turn when they discover a Zethichtalarin plot to destroy the Nathalis homeworld.  Together they have to figure out a way to stop the plot, recover the zero point bombs and kill the Zeths who were planning the attack before it’s too late.

Also, when Derek and Jarrod decide to make an “old school” run to the prehistoric dimension along with Tina, Sarah and Patricia just to add a little excitement to their lives, what starts out as a boring trip soon turns far more exciting and potentially deadly than they’d bargained for.