Immortals, book 5 of the Unseen Things series is now available! 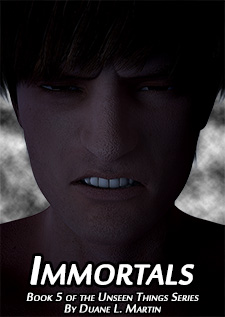 I am very happy to announce that Immortals, book five of the Unseen Things series is now published and available!  I’ve also removed “Unseen Things:” from the titles of all of the books in the series, so now they’re strictly going by their actual titles instead.

Synopsis: None of them realized at first who the mysterious woman was who showed up at their door after the party that night. None of them would have ever believed it could have been their mysterious rep, who up to this point they’d been barred from having any personal contact with. Yet here she was in the flesh, and she had a gift with her from the backers that would change their lives very literally forever.

As the group’s numbers increase, they all start adjusting to their new life and their new abilities. The first order of business is to train the new recruits, and then once that’s done, they get back to work investigating the various dimensions, both known and unknown. Old enemies return, new discoveries are made and in the end there’s a change coming on the horizon that none of them ever saw coming.

You can purchase the book right here through the official site and get it in three different formats (Epub, Kindle and PDF), or you can get it from Amazon or Smashwords.  Once Smashwords sends it out for premium distribution, it’ll be available on a variety of other sites as well.