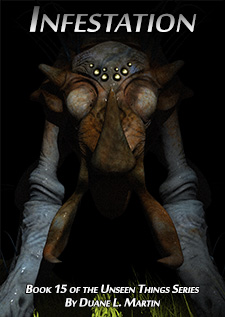 I’ve just finished publishing book 15 of the series, Infestation on all the usual sites.  It’s currently available on Smashwords, Google Play and Omnilit.  It will be available on Amazon in a few hours as well, once their system finishes reviewing it.

Synopsis: When someone steals the Zethichtalarin portal generator from a secure Nathalis storage facility, Karth and Commander Arthwal put their best men on the case.  Neither of them could have imagined however that the portal generator would be used in a plot that would lead to an invasion that would span across all four of the Nathalis’ dimensions.  An invasion that would force the humans, blue fins and all the others to put boots on the ground, standing side by side with their Nathalis friends to fend off an infestation that threatens to destroy everything.

Back in the human dimension, when Derek, Jarrod and Logan pry Charles and Richard out of the lab to go on a little trip to the planet Gilese 667C c, they end up finding a crashed ship and a dead bridge crew from a parallel dimension that leads them to uncover a tale of revenge against a massive and corrupt corporation.

And finally, now that Logan and Darla’s relationship has gotten serious, he makes the decision to bring her in on everything.  However, Tina, Sarah, Stephanie and Alarwyn have a little test for her before he does so, just to make sure she’s suitable to join the team.  Also, when Logan asks Derek to see if he can find her father that had disappeared years earlier and was presumed to be dead, what he finds in his search leads to yet another mystery that begs to be solved.