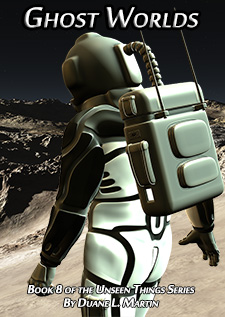 I am very happy to announce that book 8 of the Unseen Things series is now available! This book is the first in the series to transition from contemporary fantasy to a fantasy / sci-fi hybrid.

Synopsis: Four different Earths in four different dimensions left as nothing but lifeless balls of rock and sand after their moons were destroyed, sending massive chunks of debris slamming into the planets, ripping away their atmospheres and extinguishing every last bit of life. With a near infinite number of dimensions, was it beyond the realm of possibility that these four ghost worlds were nothing more than a coincidence, or was it perhaps a coordinated attack intended to destroy whatever, or whoever inhabited those worlds?

Suspicions and theories abound, but they’ll never find the answers without investigating, and for that they’ll require some new gear, including space suits, metal detectors and ground penetrating radar. If these dead worlds truly were inhabited by the race they called the creators, then they not only need to find that out for sure, but they also need to find out who destroyed them, and why.

Also, in an effort to repair a relationship that had grown distant, Jarrod, Derek, Tina and Sarah invite Patricia to come down to the cabin with them for a little vacation so they can reconnect and get things back to the way they were back in the early days. While they’re there, they head out to explore an as of yet unexplored dimension and find a world that’s beyond even their wildest imaginations, as well as a mineral that could either be the key to producing limitless energy, or the catalyst of their own destruction.

Ghost Worlds is book 8 of the Unseen things series.